Soliton was successful in its first application, in the UKCS 30th Licensing Round, securing Central North Sea Blocks 23/26e and 30/1d. These blocks contain a prominent, historically poorly-imaged salt diapir with reservoir targets in the established Cretaceous/Palaeocene chalk and Palaeocene sandstone intervals. The blocks also contain a small, shallow oil discovery made in 1988 by well 30/1-7.​

Following licence award, work focussed on detailed mapping on new dual azimuth 3D data of a substantial diapir flank prospect, the Isolde prospect, along with other geological studies required to meet the 3 year first phase work commitment. A farmout campaign commenced in Q1 2019 to seek industry funding to progress the prospect through exploration drilling. The farmin of Equinor UK Limited  with an 85% interest was announced in July 2019. Soliton retains a carried 15% interest. 3D seismic reprocessing and additional studies commenced in late 2019 under Equinor as operator, with the final reprocessed seismic volume due for delivery in Q3 2021. Owing in part to the protracted reprocessing duration, in Q2 2021 the Oil and Gas Authority extended the first phase of the licence by one year to 30th September 2022. 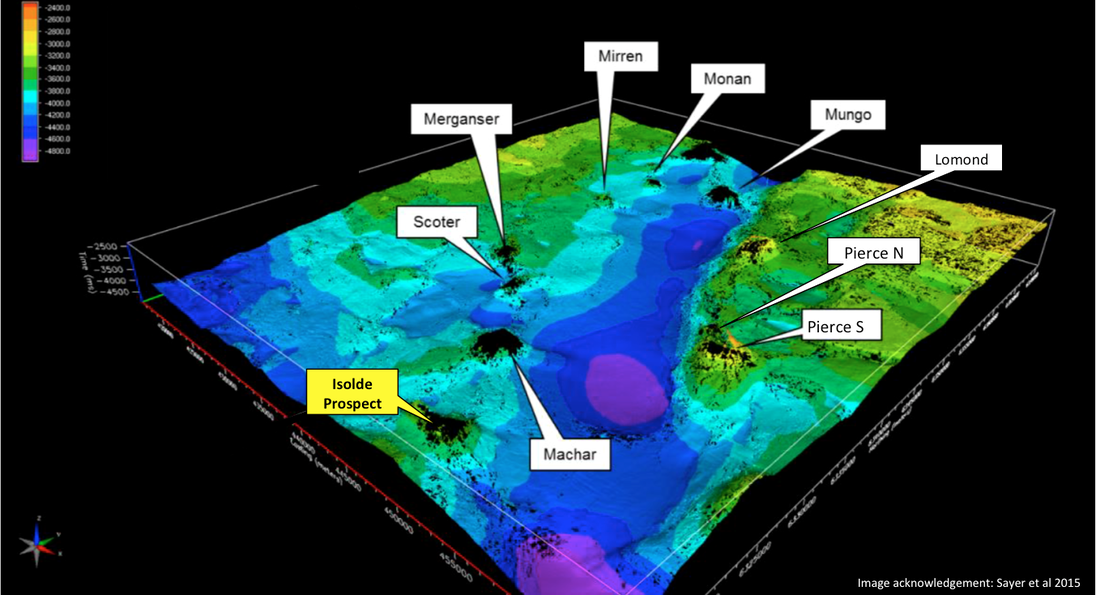 ​
Base Cretaceous regional two way time structure (salt diapir fields are labelled, most being similar to the Isolde prospect).


The exploration target in Blocks 23/26e and 30/1d is a typical Central North Sea (CNS) salt diapir flank trap. This prolific trap type has a 100% success record in the main part of the CNS, where more than a dozen such fields have been found. These have an average hydrocarbon column height of around 900m (c. 3,000') and average recoverable reserves around 100 mmboe. Most of these fields were discovered much earlier in the exploration history of the CNS and have been on production for many years, with the last two undeveloped fields now in development.

The flank of the Isolde salt diapir was drilled in 1992 by well 23/26-17 which was plugged and abandoned after encountering residual oil saturations with oil and gas shows in the regional Forties Sandstone Member reservoir. The 23/26-17 well penetration is interpreted to lie a short distance below the base of a retreated hydrocarbon column. This interpretation is based on close analogy with a number of similar CNS diapir flank fields which have residual oil zones of 30m to 120m thickness immediately below the oil-water contact . Here, existing hydrocarbon columns appear to have retreated due to minor trap leakage, although structural tilting, hydrodynamics and late pore pressure increase may also be contributory factors.
​
In common with pre-discovery seismic imaging of many of the adjacent, similar traps, the Isolde structure was only partially imaged on poor quality legacy 3D seismic data, on which around 600m (2,000') of top reservoir relief above regional level could be mapped. This structural relief appeared anomalously low when compared with an average of 1,300m - 1,400m (4,300' - 4,600') of mapped relief in the analogous CNS fields. A detailed study of the analogous diapirs reveals that the dimensions of these traps are both predictable and capable of 2D structural validation. This calibration study indicated that the Isolde prospect would be expected to have 800m to 900m (2,600' to 3,000') of untested reservoir relief up-dip of flank well 23/26-17. 3D data obtained after licence award images much of this up-dip structure and 2020 reprocessing of these data have permitted the mapping of a substantial diapir flank trap which had previously been overlooked despite its close proximity to several major fields.

The Isolde prospect is surrounded by large oil and gas fields in the target Chalk Group and Palaeocene sandstone reservoirs.  Potential recoverable resources are in line with the average 100 mmmboe of the analogous fields, split approximately 80:20 between the chalk and sandstone reservoirs. Chance of exploration success is appreciably better than 1 in 2, reflecting both the 100% success ratio of this trap type in the study area and the close proximity of similar, large fields.

The diapir calibration study mentioned above was presented at a 2019 research conference entitled 'Salt tectonics: understanding rocks that flow' held at the Geological Society, London. An extended abstract is available at: